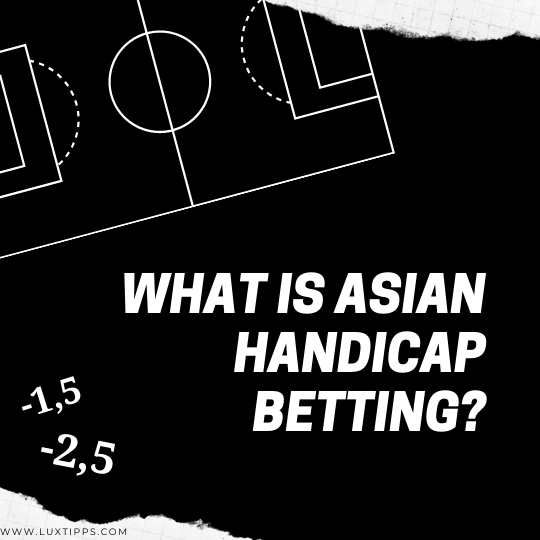 In our latest blog, we take a look at the Asian handicap market and how bettors can utilise the various granular markets within the space to maximize their profits.

The question we always get when talking about Asian handicaps is “Why is it called the Asian handicap?” so I suppose I will get this out the way now before you swamp our inbox with the same question.

The market is believed to have originated in Indonesia in the 1990s, under the name “hang cheng betting”, and a bookmaker in the country asked British journalist and gambling expert Joe Saumarez Smith to coin a phrase more befitting of the western tongue, and thus, the Asian handicap market was born.

Now we’ve got that out the way, let’s get stuck in.

Why should I try the Asian handicap market?

The Asian handicap market is an especially useful one when there is a much stronger team/player in a matchup between two parties. Let’s take a football match between Manchester City and Burnley as our example. Let’s make it clear now that I have absolutely nothing against Burnley, and I could have chosen several teams to have been our theoretical guinea pig for this one, but I like claret shirts, so that’s my excuse.

The typical odds for Manchester City in a home game against a team like Burnley would be something in the region of 1.10, meaning you would have to spend £10 for each £1 of profit. Most punters wouldn’t bother backing at this price – why would you? Does the minimal return justify the large upfront costs? Probably not.

However, we can take advantage of the obvious imbalance between the two sides to make a profit. This is where the Asian handicap market comes into play. The primary job of the Asian handicap is to eliminate the large disparity in odds between two teams, making it a more attractive proposition for punters.

Odds and markets on the Asian handicap market are represented by a series of odds that look something like this: 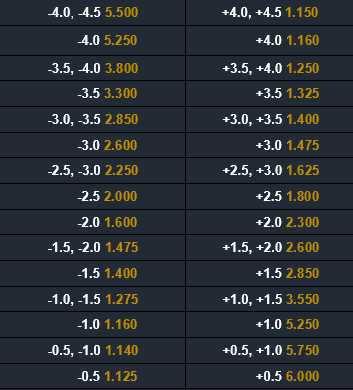 The minus and plus signs essentially point to which team starts the match at a numerical deficit and which one has a head start. As Manchester City are the clear favourites to win the game outright, the markets on offer in the Asian handicap place them at a disadvantage numerically, and here is where we potentially cash in.

Let’s say that we think Manchester City will win by at least three clear goals. You have a few options at your disposal.

First off, you could back Manchester City in the -2 market at odds of 1.6. This means:

Now, we can also eliminate the threat of a draw nulling our bet by backing the alternative -2.5 market. This makes it a straight-up win or lose scenario. It’s similar to when one might bet on a game to be over 2.5 goals – one goal swings it either way. If there has been a match with exactly 2.5 goals in it, I’m yet to see it.

This means that there is slightly more risk involved, but you don’t bet to break even, so in many ways, it is worth pushing the boat out for those juicier odds.

You may also have noticed that there are options where two markets are pushed into the same bet, like below:

Another option for bettors is to split its stake into two different handicaps, when the difference between the two competitors isn’t as stark, but enough for you to want to punt some of your bankroll on the slightly more lucrative market. The odds of 3.8 are better than betting on -3.5 on its own, but worse than if you were to just back the -4 market outright, but it gives you a layer of security in case your team doesn’t quite romp to victory in the fashion you had originally hoped.

So, using the Manchester City example, if we were to place a £10 stake on the -3.5, -4.0 market (essentially meaning £5 each on the two markets), the following would be your win/loss breakdown

The way in which these odds are displayed can vary from bookie to bookie, so make sure you keep an eye out for markets that look like this:

This market is the same as the previous screenshot but is displayed as a singular integer of 2.75. It’s known among many bookmakers as a quarter handicap and admittedly does look slightly tidier than the previous example.

It’s also worth bearing in mind that it is a more than viable option for you to back the underdog in a game if you think they are going to put up a valiant fight and not receive the hammering everyone else thinks will happen.

How often would you see an away side at odds of 1.475 when starting with a theoretical three-goal head start? Top teams have their off days, and while it is grossly unlikely that underdogs win away from home at the top clubs, it’s not too unusual that the favourites take their foot off the gas when they have gone a couple of goals ahead.

Why wouldn’t I bet on the Asian handicaps?

The only real glaring disadvantage when it comes to betting on the Asian handicap market is the sheer complexity of it. One would be forgiven for giving it a try, but it’s almost a rite of passage that you will make a mistake when trying the market out for the first time, mainly because of the depth of options – so be careful.

If you are just dipping your toes into Asian handicap betting, we would recommend starting off in the simpler markets. Don’t try to overcomplicate things too early with split bets on -3.5, 4.0 markets unless you fully get your head around the easier outright markets that have just one market.

Personally, I like the binary bets that only have two outcomes. This means you know exactly where you are, and you don’t have to worry about the feeling that you wasted your time on a bet that ended up with you just getting your stake refunded.